Considerations for Commingling Cattle: Looking Beyond the Averages

The most common health concern for weaned calves is a bovine respiratory disease (BRD) that costs the industry approximately $800 – 900 million per year (Chirase and Greene, 2002).

As weaning season approaches, and cattle are subjected to the stress of transport and commingling (just to name a few stress sources) it is important to have a health plan specifically for managing respiratory challenges such as BRD.

Using data to construct patterns reflecting health status can guide an operation in treatment plans and maximize profits. Unfortunately, many decisions are not based on pre-planning, rather retrospectively analyzing information that may be dubious and frequently may contain unsubstantiated bias. Retrospective data can certainly be useful in providing key insights that help to avoid health “wrecks”, but the value in that data is only as good as the accuracy and interpretation of the data.

One of the first steps in beginning an evaluation of an outcome such as BRD is to determine “what happens and when”. Approaching BRD with a generic program that never changes and fails to create sustainable success is a risk simply because there are so many variables that differ within groups of cattle, as well as between operations. Unfortunately, BRD does not discriminate according to these business model variations.

The first step is characterizing baseline morbidity over time. Figure 1 demonstrates a hypothetical average first pull rate of 30% with a peak of 120% in a constant flow comingled starting operation over the first 30 days. While this average rate could be considered successful, the outlier peaks are indicating that many lots were excessively high in the percentage of cattle pulled over these 30 days. Actions to further define the extremes should be explored to reduce outliers which will also positively influence the average. When we analyze the data one step further in the investigation, there is evidence that the average can be woefully misleading. 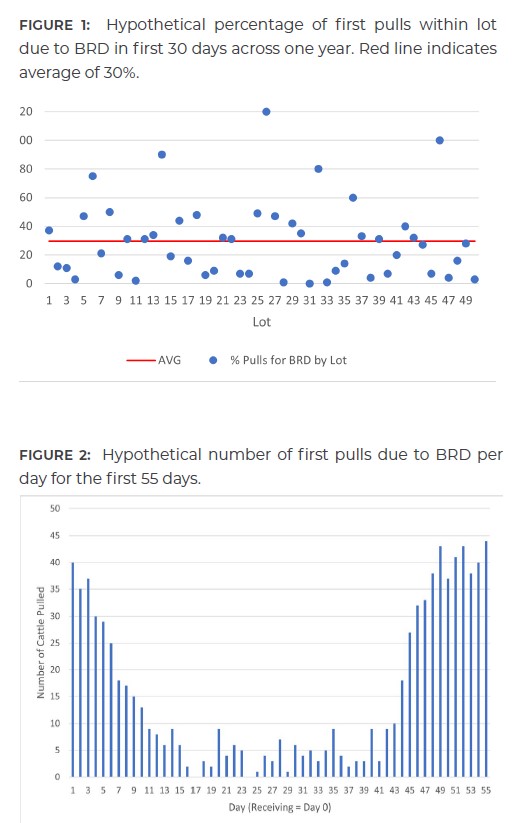 To understand the demonstrated pull rate more thoroughly, Figure 2 assesses pull the rates for BRD of individual lots over the same time period that together are used to determine the average in Figure 1. This chart is also a visual representation of the “when” component: when the first BRD pulls occurred during a 55-day starting phase. It shows the number of pulls per day across the first 55 days of receiving. There is a significant number of pulls early which is to be expected. There is also a secondary spike around day 40 that perhaps deserves some attention and an action plan to reduce that pattern. These later BRD cases may affect timeline commitments for sale, delivery dates, headcounts, and weight specifications.

Other challenges may surface such as impairing the ability of an operation to take advantage of a better margin in the market because of delays in inventory turnaround due to compromised cattle performance in the subsequent phase.

These steps in evaluating what happens and when go beyond speaking to averages and show a beginning pathway to the variables that produced what you are experiencing in your operation that may not be quite so visible when working with just an average over a short time. 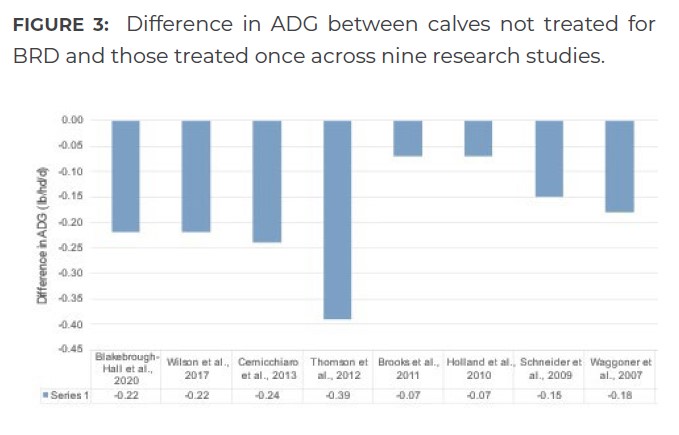 The effect of BRD is not limited to mortality and morbidity. Figure 3 demonstrates the effect of BRD on cattle ADG across numerous studies over the previous 20 years. On average BRD reduces cattle ADG by 0.20 lb/head/day and can reduce hot carcass weight by 10 lb/head (Cemicchiaro et al., 2013), which is important for producers retaining ownership. Gain patterns of cattle are difficult to establish because of infrequent weighing, however; feed intake patterns can proactively and retroactively signify a health event. Disruption to intake often indicates a health challenge before the animal shows clinical morbidity.

During a health event, immune stimulation causes an increased need for specific amino acids from protein for the production of immune system cells (Colditz, 2002). Available amino acids in plasma otherwise used for growth are partitioned for the immune response. This is further exacerbated by reductions in nutrient intake during a health challenge resulting in even fewer nutrients taken in and available for growth. To quantify this, the immune system will use 1.0 g/glucose/hour in active tissue mass for a growing calf during immune activation (Kvidera et al., 2017) which may equate to nearly all of the daily calories necessary for gain. The cost to productivity caused by supporting the immune response can add additional expense to a system. To reduce the impact of the caloric cost of immune activation, ensuring proper feed intake of a ration that is formulated to meet nutritional requirements is critical. Supplementing cattle during nutritional shortage (for example, forage drought or dormancy) or providing a high-quality ration can help ensure proper nutrient intake.

Defining multiple high-impact and robust metrics of BRD that are measurable can help to determine success or opportunities within a herd. Accurate data and interpretation can also help avoid decisions based on frequent product changes or making changes based on the wrong variable. Furthermore, these patterns will also help to determine the best treatment plan under guidance from a veterinarian as certain antibiotics are more effective at certain times in disease progression.

These metrics are not limited to mortality or morbidity but should include feed intake, to accurately assess cattle performance. The ability for an animal to gain weight depends on many factors such as feed availability, feed quality, the genetic potential for gain, and very important health status. Nutrition and health are often approached as two independent contributors to success in an operation when they are dependent and influenced by one another. Priority is often placed on health with nutritional needs being secondary and considered met as long as feed disappearance meets some established goal level. Looking beyond averages to link these multiple variables through patterns over time is yet another tool to consider during weaning as we commingle calves and increase risk incidence to BRD.